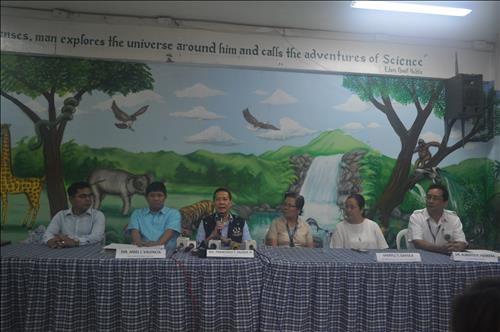 The Department of Health-National Capital Regional Office (DOH-NCRO) and Central Office, together with the Department of Education-National Capital Region (DepEd-NCR), held a Dengue Information Drive by conducting series of activities that strengthen the fight against the growing issue on the dengue immunization. To jump-start the information drive, a press conference was conducted at Parang Elementary School, Marikina City on January 11, 2018.

Secretary Duque formally opened the program by inviting queries regarding issues on Dengvaxia. Some questions were also answered by DOH-NCRO Director Valencia. The open forum helped alleviate the worries of parents and teachers with regard to the well-being of the children who were injected with the Dengue vaccine. Precautionary measures in avoiding cases of Dengue were also reminded. They both emphasized that we must always follow the ‘4S Against Dengue’ (S. Sec. Duque also added another ‘S’ which stands for ‘Surveillance’. Everyone should remain attentive, observant and responsive.“Heightened surveillance is the key to Dengvaxia immunization problem,” said the health secretary.

Aside from this, the health representatives also invited questions from the media. This time, information regarding Dengvaxia as questioned by the interviewers were shared to the public. Misconceptions and wrong information  on Dengvaxia were clarified.

Sec. Duque called everyone’s attention and  reached out to the partner agencies of DOH, teachers, and parents to cooperate with the health sector in fighting the real problem brought about by the Dengue immunization issue. In his closing remarks, he assured that the agency will continue to help all schools affected by the program, yet at the same time they will also exhaust efforts in generally promoting Dengue-free communities.