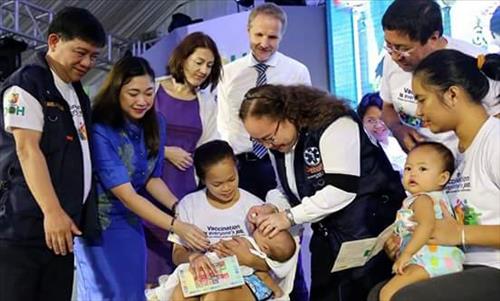 Notably, Taguig City Mayor Lani Cayetano eagerly accepted the challenge of increasing the rates of immunization coverage in Taguig and become a model city to other local government units.

Meanwhile, the event coincided with the launching of the Philippine Health TV project, wherein Taguig was also the first recipient. This project aims to strengthen the health promotion and education to a wider coverage in the country.

In the same month of its launching, the DOH aired the “Baby Come Bak (Back to Bakuna)” infomercial in various health centers and likewise made available online.

In this campaign, a classic boy band of five men in all white starred the music video. The jingle showcased not only mothers from all walks of life but as well as the different benefits of immunization; hence its encouraging and catchy chorus on loop “bring your baby back to bakuna.”

The reason, however, of producing this commercial is beyond mere entertainment. Assistant Health Secretary Dr. Enrique Tayag during his interview with the Philippine News Agency addressed that the immunization trend in the country decreased from 80% in 2015 to 65% in 2016. This decline equates to more than 400,000 newborn babies who missed their needed vaccines.

Consequently, mothers who previously brought their children to health centers who were told the vaccines are yet unavailable became hesitant of going back; considering the cost of transportation and inconvenience to their regular duties.

In this regard, the campaign video was released to relay to the mothers the importance of going back and/or taking their children to the health centers for immunization. Having recognized the power of social media in efficiently influencing and reaching a wider scope of audience, the DOH along with its partner LGUs are hopeful to lift the immunization rate not only back to 80% but 95% this year and in the forthcoming years.