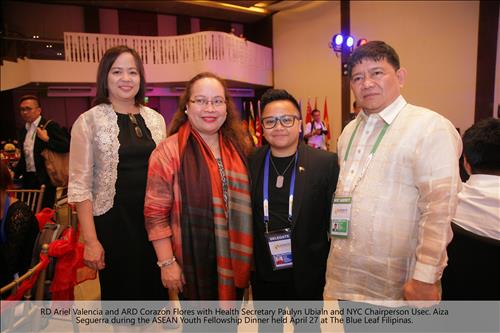 PARAÑAQUE CITY – As part of the hosting tasks of the Philippines for the 50th anniversary of the Association of Southeast Asian Nations (ASEAN) this year, the Department of Health - National Capital Regional Office (DOH-NCRO) welcomed the ASEAN youth leaders through a fellowship dinner last April 27, 2017 at The Blue Leaf Filipinas in Aseana City Complex.

Honored guests consisted of delegates from Brunei Darussalam, Cambodia, Indonesia, Laos, Malaysia, Myanmar, Philippines, Singapore, Thailand and Vietnam. Each member nation was represented by young leaders and advocates who also had the opportunity to interface with the state leaders in the ASEAN Summit conducted on April 30.   The Philippine delegation was headed by Under Secretary. Cariza “Aiza” Y. Seguerra, Chairperson of the National Youth Commission (NYC).

The dinner event was officially opened by Dr. Ariel Valencia, DOH-NCRO Director.  He mentioned in his welcome remarks that the young sector today is very valuable in making solutions to current political, security, sociocultural and health-related issues.

Dr. Valencia noted that the youth has been facing certain dilemmas in education, unemployment, substance abuse, mental health, HIV/AIDS and participation in certain community activities. Given so, he emphasized the role of the DOH in making the health needs of the people in all stages of their lives, a priority.

To highlight HIV/AIDS awareness, Former Bb. Pilipinas and 2011 Miss Universe third runner-up Shamcey Supsup-Lee gave an advocacy talk on HIV/AIDS prevention. She accentuated each individual’s responsibility to avoid and get tested and not spread the disease. “Healthy eating, exercise, clean environment and a positive mental attitude can make a big difference,” Supsup-Lee added.

She also mentioned that there are therapeutic drugs that can alleviate and help fight the infection acquired by people living with the disease. “But I think what they need more is the support from their families and from their friends,” as Supsup-Lee pointed out.

Consistent with the advocacy, Health Secretary Paulyn Jean P. Rosell-Ubial mentioned in her keynote message that the prevalence of HIV/AIDS in the Philippines have continuously increased since 1984. According to Ubial, one of the good practices in our country is that we are strictly enforcing and improving the Philippine AIDS Prevention and Control Act of 1998 or R.A. 6508. Secretary Ubial recognized that the health sector considers HIV/AIDS prevention and control as a major public health program thus having it included among the 12 legacies of the Philippine Health Agenda.

“This ASEAN Youth Forum is actually a good way for us to exchange best practices and experiences in our fight against HIV/AIDS, as well as teenage pregnancies,” she added.

The Health Secretary thus concluded her message by suggesting that the Philippines can learn more through the camaraderie with our neighboring Southeast Asian countries and hoped that this event will serve as a road for continuous collaborations within the nations involved.

To refreshen the evening, intermission numbers were rendered by notable performers such as Ms. Gerphil Flores, and singer/actor Mr. Derrick Monasterio. Guest performers also included the all - male dance troupes ‘LED Tron Dancers’ and the ‘Sindaw Dance Group’ who performed their lively and creative production numbers while the local band ‘Banda ni Kleggy’ gave a mini-concert for the guests.

NYC Senior Officer Mr. Paul Anthony Pangilinan formally closed the programme by commending the men and women behind the program and recognizing the active participation of the ASEAN young leaders.

The NYC, Philippine AIDS Council (PNAC), Joint United Nations Programme on HIV/AIDS (UNAIDS) and DOH Central Office were the major collaborators of the DOH - NCRO for the event.