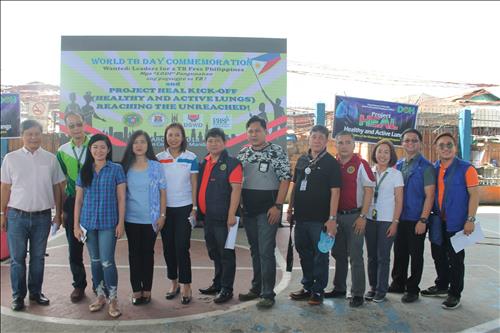 MANILA - Project Healthy and Active Lungs (HEAL) extends the advocacy to provide TB services for the urban poor population, targeted to reach the unreached once again. The event kicked off on March 23 at the Amadome, Baseco Compound. Attended by Conditional Cash Transfer (CCT) beneficiaries, this project was timely launched in celebration of World Tuberculosis Day on March 24. The activity carried the national theme, “Mga LODI, pangunahang sugpuin ang TB!”

The Department of Health-National Capital Regional Office (DOH-NCRO) joined hands with the local government of Manila and the Philippine Business for Social Progress (PBSP) for the efficacy of the launched activity.

Prior to the official activity, a parade participated by various organizational groups in Baseco such as the Care for Women Organization, Bantay Kalusugan, Office of the Senior Citizens, Hope for the World, World Vision, Pedicap Operators Drivers Association, KALIKAT, Kabalikat ng Bayan sa Kaunlaran (KABAKA) and LINGAP. This was held to commemorate the occasion which was also participated by officials and representatives from DOH-NCRO, partners, Manila City Health Office along with community volunteers.

The program was formally opened by the acting CHO Dr. Benjamin M. Yson who represented Metro Manila Mayor Hon. Joseph Ejercito Estrada, Dr. Amelita Manalang of the Department of Social Welfare and Development (DSWD) - NCR and a representative of PBSP each gave brief messages to show their support to the campaign against TB. Dr. Jose Mari Castro, DMO V of District III, delivered the closing remarks.

Similar to the Project HEAL initially launched in Makati City, this event aimed to provide citizens with the proper information on tuberculosis and how to treat it. In his keynote message, NCRO Regional Director Dr. Ariel I. Valencia stated that there are 32,000 cases of tuberculosis in Metro Manila out of the one million cases nationwide. He emphasized that appropriate remedies must be given to all those who are positive of TB. He therefore urged all patients to consult and get proper treatment from the nearest health facilities. Furthermore, Dr. Valencia thanked and commended the city of Manila for their continuous support and implementation of the health programs of DOH. “Sana po dito sa Baseco ay ipakita natin ang isang mamamayan na malusog, produktibo at bahagi ng kaunlaran ng lungsod ng Maynila,” he added.