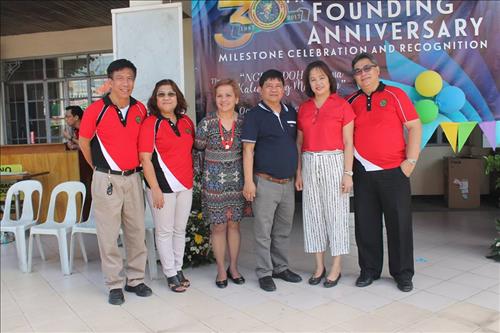 It has been thirty eventful years since the effectivity of the Executive Order No. 119 which paved way to the birth of the National Capital Region (NCR) for Health. Now referred to as the Department of Health - National Capital Regional Office (DOH-NCRO), the agency under many leaderships and different support staff, has been through thick and thin in overcoming various setbacks throughout the years. The road to becoming a global leader in health has been callous yet rewarding. Above the many struggles are also the many successes which have defined and molded the agency into the NCRO that it is today.

To commemorate these three decades, a 30th Founding Anniversary Milestone Celebration and Recognition was held at the regional office on October 20 with the theme “NCRO-DOH 30 na, sa kalusugan maaasahan.” Prior to the official program, a thanksgiving mass was conducted, followed by the blessing of the entire office.

A regional painting competition was also conducted at the Business Center of the said office. The participants created their artworks relevant to the theme, “Health Literacy among Filipinos Towards Health for All.” Different art media were used in the competition thus contributing to the stunning features and overall aesthetic content of the participants’ master work.

It was a simple yet memorable celebration as interactive games, raffles and sports activities were enthusiastically participated by the NCRO staff. Joined by the medical center chiefs of the four retained hospitals, the NCRO family feasted on a bountiful boodle fight as a means of recognizing the many blessings received by the agency during the previous as well as the coming years ahead. With the incessant support of its partner agencies and local government units, this 30th year milestone adds another feather in the cap of DOH-NCRO as it has strived into becoming one of the nation’s pedestals in executing health reforms and programs in the region.