BHW Convention: A Tribute for the Unsung Heroes 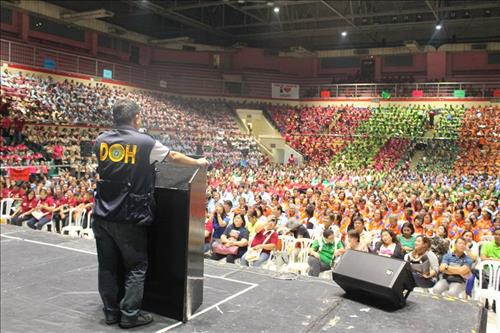 BHW Convention: A Tribute for the Unsung Heroes
By Ciara Fandinola

PASAY - Over four thousand Barangay Health Workers surged the Cuneta Astrodome as they waved and cheered in festive colours during the Regional BHW Convention, September 29. Now on its 2nd year, the DOH-NCRO gathered once again the “unsung heroes” of our health delivery system through a program that recognized their immeasurable efforts and awarded exceptional BHWs in the region.

Congresswoman Emi Calixto-Rubiano also arrived in the latter part, followed by Assistant Secretary of Health Dr. Eric Tayag who did not fail the crowd with his most anticipated dance number.

A turnover ceremony was then organized to distribute vests, bags, umbrellas and identification cards for the BHWs. In addition to that, various prizes sponsored by LGUs were also given through a raffle draw.

Not only was the activity showered with wisdom, awards and prominent visitors, it was overflowing of entertainment as BHWs owned the spotlight during the dance competition.

To conclude the day, newly elected BHW Presidents, Primary Health Care Coordinator, Outstanding BHWs and those in service for more than 30 years coming from the 17 LGUs were recognized. In the dance competition, District 1 was hailed as the Champion followed by District 4, Dirstrict 2 and District 3.