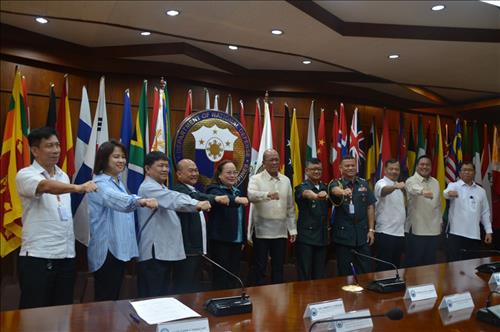 The agreements signed were pursuant to the ‘Guidelines for the Implementation of the Health Facilities Enhancement Program (HFEP) FY 2017’ and the Medical Assistance Program (MAP) for FY 2017.

As settled by both parties, a budget of thirty million pesos (Php 30,000,000.00) will be allocated to the Army General Hospital, which shall be utilized on the implementation of its infrastructure project under the HFEP. Funds amounting to twenty million, three hundred thousand pesos (Php 20,300,000.00) and two million pesos (Php 2,000,000.00) will be transferred to AFP Health Service Command/V. Luna Medical Center and Presidential Security Group Station Hospital (PSGSH) respectively. The budget will be used as medical assistance for uniformed personnel and authorized indigent patients of the said hospitals. Army General Hospital is also expected to receive 2 units each of fetal monitors and dopplers while 1 unit each of 2D Echo Machine and Hematology Analyzer will be turned over to PSGSH.

This marks as another highlight of the health sector’s support for the military hospitals especially during the nations’ debacle at Marawi City. As stated in the agreements, DOH-NCRO is to “ensure the availability of medicines, medical supplies and other health care services needed by the eligible patients.”