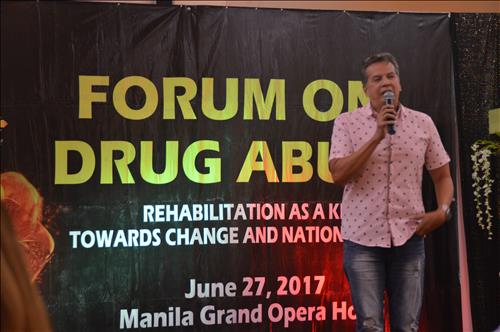 Drug Dependents: Change is Possible through Rehabilitation
By Ciara Fandiñola

Exactly three days before the first year of President Rodrigo Duterte’s inauguration and stringent war on drugs, the DOH- NCRO organized a Forum on Drug Abuse in order to provide updates on the campaign and the following actions undertaken.

The forum held last June 27 at the Manila Grand Hotel, however, did not only discuss the Dangerous Drugs Abuse Prevention and Treatment Program (DDAPTP) and the response of different agencies. The key speakers reiterated, above all, the importance of rehabilitation and everyone’s role in helping the victims get through addiction with medical aid.

Dr. Valencia further noted the critical role of the Department of Social Welfare and Development (DSWD) on the management of the community-based programs with partner agencies.

Additionally, he commended the local government chief executives in Metro Manila for the best practices they perform in their respective cities.

The forum likewise provided discussions on the Republic Act 9165: Comprehensive Dangerous Drugs Act of 2002 by the Chief Health Program Officer of DOH- TRC, Dr. Alfonso A. Villaroman, Situation of Drug Abuse in the Philippines and in Metro Manila by Dr. Manuel C. Panopio and the Effects of Drug Addiction reported by Dr. Jose Bienvenido M. Leabres, both Medical Specialist II of the DOH-TRC.

Moreover, a response from the Regional Peace and Order Council (RPOC) was delivered by a representative from DILG- NCR after the Photovoice of DOH- NCRO initiatives was presented.

Dondi Narciso of Narcotics Anonymous took over as well in sharing a little background of their organization and how they were created in the same “hopes of helping the participants going through the same path.”

“Seeing fellow addicts recovering helped me. That is in addition to my consultations with the psychiatrists” said Mr. Narciso. He also added that the only requirement they ask for the participants is “kailangan willing kang magbago, gusto mo.”

Supplementary to the comprehensive talks are the testimonials from the former model and actor Lito Gruet and Rene Santos.

According to Mr. Gruet, “bottomline, nasa tao pa rin. It’s better that you be given a chance than having no chances at all.” Mr. Santos, father of a drug abuse victim firmly believes that schools should also conduct orientation to parents about drugs; “the best prevention is still education” he remarked.

To conclude the program, DOH- NCRO Asst. Regional Director Corazon I. Flores led the Pledge of Commitment in Support to the Dangerous Drug Abuse Prevention and Treatment Program.

The DOH- NCRO together with our partners from different supporting agencies went home equipped with knowledge and aspirations to continue seeing hope among the victims and direct them towards medical treatment and rehabilitation.