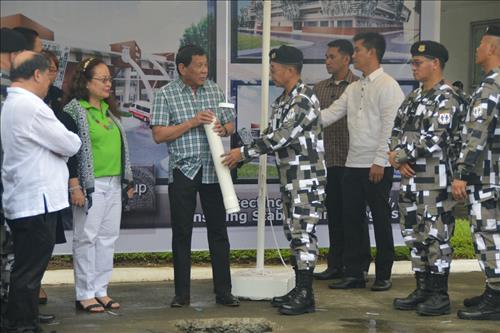 Whenever we come across stories about our security groups, national police, soldiers and armed forces we often associate them with the words “secure”, “serve”, “defend” and “protect.” Most certainly, engraved in their titles are the duties and responsibilities towards the security of our land. What most of us forget, however, is that they are humans as well; even the bravest fighter also needs to be healed and protected.

Thus, the Department of Health has continuously showed its gratitude and full support in form of providing medical assistance to both civilians and soldiers, especially in light of the events in Marawi City recently.

Moreover, DOH-NCRO has coordinated with the Presidential Security Group Station Hospital (PSGSH) under the Department of National Defense (DND) to enact the request of President Rodrigo Duterte to expand and upgrade the station hospital’s infrastructure and available facilities.

Working under the umbrella are DOH’s Office for Field Implementation Management (OFIM) and Office for Administration, Finance and    Procurement (OAFP) and the Health Facility and Enhancement Program (HFEP) of NCRO.

A budget of 21.5 million has recently been downloaded to NCRO which will be utilized for the procurement of other necessary equipment namely 1) a 2D Echo Machine, 2) two units of OR Lights (LED) for OR/DR, 3) two units of Anesthesia Machines with Ventilator, 4) a Generator Set, 5) a semi-automated Chemistry Analyzer, 6) a Hematology Analyzer-Fully Automated with UPS, 7) an Autoclave Machine and, 8) an Infant Incubator.

Currently, other than the downloaded 21.5 million, the rest of the budget along with the procurement process of the corresponding facilities is expedited and monitored by the DOH Central Office.

This is considered crucial since an additional of 408 soldiers and 19 officers have been sent to Marawi City last June 17 to aid in the on-going conflict.

DOH is likewise providing medical services for the civilians in the city.

Looking back, the partnership between state defenders and health providers has been etched in history. This only proves that until now we still recognize the greater impact of teamwork in protecting our motherland and countrymen, not only in the battlefield but through healthcare as well.

MALACAÑANG – A ceremonial groundbreaking ceremony was held on June 28 at the Presidential Security Group Station Hospital to commemorate the agreement     between the Department of Health and the Presidential Security Group with regards to the construction of its hospital. The event was held in celebration of PSG’s 120th     Founding Anniversary as well.

The hospital staff were overjoyed as President Rodrigo Duterte graced the event with his presence. Assisted by Secretary of Health Paulyn Jean Rosell-Ubial and PSG Group Commander BGen. Lope Dagoy, President Duterte lowered the time capsule containing the hospital’s blueprint during the ceremony.

The blueprint was signed by Arch. Roger Herrera and NCRO Assistant Regional Director Dr. Corazon Flores who attended on behalf of Regional Director Dr. Ariel Valencia, alongside Sec. Ubial representing DOH. PSG on the other hand was represented by Head of PSGSH Ltc. Phaveena Aguinaldo, Commanding Officer of the PSG Lt. Col. Felix Terencio, and President Duterte himself.

PSG hopes that the construction will be promptly initiated considering that the president is reportedly a regular patient at the dental clinic, according to the PSGSH staff.

As the highest leader of the country, President Duterte hopes that hospital facilities and equipment, not just in PSG but in all military hospitals in the Philippines, are fully functional. He strictly urges the health sector on hastening the procurement of the needed facilities