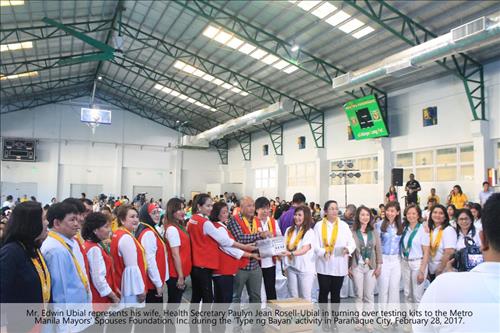 Conceptualized by renowned stylist Ricky Reyes, the ‘Type ng Bayan’ program aims to consolidate information on the blood type of all Filipinos, allowing them to be informed of their own blood types. The program is highlighted with the provision of identification cards bearing the patient’s name, photo, blood type and five possible blood donors in case of emergencies. According to Reyes, a living blood bank within the community will be made possible through the help of this project.

Ms. Janet Olivarez, MMMSFI President and wife of Mayor Olivarez, thanked all sponsors and organizers who made the event possible. In this event alone, Type ng Bayan had already successfully tallied an estimate of 2,900 blood-typed individuals and 40 blood donors.

Promotion and funding of this nationwide activity is spearheaded by the Office of the President, DILG and CSAI, and will eventually be turned over to the MMMSF. Each local government unit will receive at least 100 testing kits from DOH which will be distributed to all barangays.

The ‘Type ng Bayan’ program was officially launched at Mandaluyong City Hall on February 7 then on February 26 at Pasig City Sports Center; March 22 in Pasay City and May 9 at the Quezon City Experience Museum.